A critical feature of shared file systems, file locking is a protection mechanism that prevents two users from editing the same file at the same time. Within the File Fabric the first user “locks” the file before editing. The lock is added to the file metadata tracking who made the lock and when. When a second user attempts to edit the same file, the behavior depends on how the user attempts to open the file.

The File Fabric supports automatic and manual locking. When a file is opened through a desktop application or drive, locks are created automatically in many cases. These locks are released when the file is closed.

Users can also manually lock and unlock files themselves through the drive, desktop applications and through the web-based Cloud File Manager.

Users can only unlock files they have locked. The Organization Administrator and users with Admin role can remove any lock.

Locks are not enforced for the org. admin or members with the Admin role when they open a file that is already locked by any user.

Starting with version 2106.07, locks are created with a 24 hour lifespan and, unless they have been extended, expire automatically after 24 hours.

Locking a file will also lock all versions.

When a user tries to open a file for editing and the file is already locked by another user, the file will be opened for read-only access. The File Fabric does not provide an option to notify the read-only user when the file becomes unlocked.

File locking is supported with all mapped storage providers. In general direct access to the storage outside of the File Fabric circumvents the lock. Locks for Microsoft Office, OpenOffice and LibreOffice are however synchronized with SMB filesystems.

When a user attempts to upload, update or lock a file through the File Fabric a check is made for a lock in SMB. If the file is locked in SMB an error is returned that document is locked.

When an office application (Microsoft Office, OpenOffice or LibreOffice) opens a document through a File Fabric cloud drive a lock file is created. This file is detected and File Fabric automatically creates the same lock file in the SMB filesystem. Office applications that are accessing SMB outside of the File Fabric will then know that the file is locked.

Automatic locking is not supported for the older Microsoft Office file formats such as .xls, .doc and .ppt. Files of these types can be locked manually from the Web File Manager or the desktop tools.

If a file remains locked it can be because:

Also note an Administrator can unlock files (in addition to the user who owns the lock). 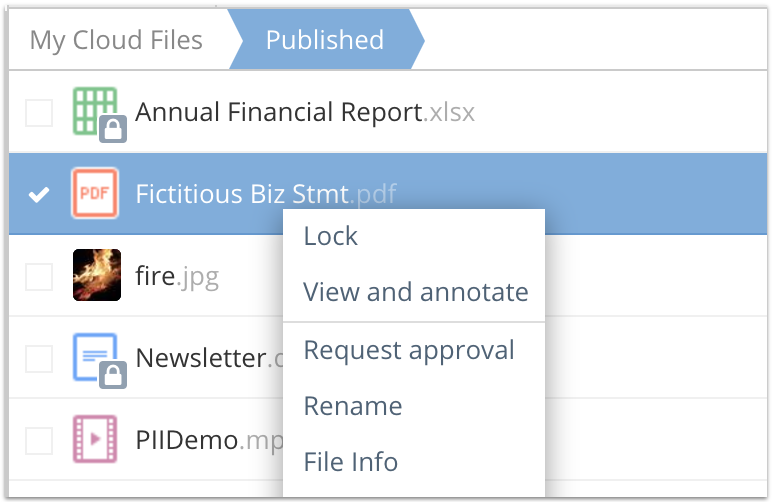 Files can be locked and unlocked from the web file managers on right click. If a file has a lock icon it is locked. Display the info panel to see who has locked the file.

In the Windows dedicated explorer if you double click on a file to edit then you will be prompted to lock the file prior to it being opened. 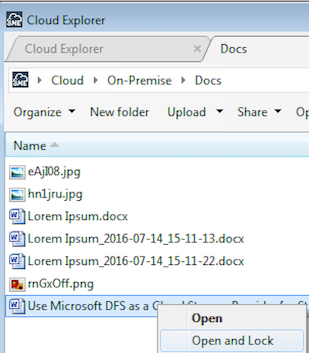 Locking from the Windows Virtual drive or WebDAV drive can be achieved explicitly from a right-click file action.

RTF files and Autodesk DWG files will also be auto-locked.

The Legacy Mac Drive also features explicit file locking and unlocking. Locked files can be identified on the drive by the lock icon against the file.

As with the Windows Drive if office files are launched directly from Mac Finder then they are auto-locked and auto-unlocked on exit.

The menu option to open Cloud Edit will not be available if the file is currently locked.

Applications launched from Cloud Edit on Windows lock files. The lock is released when the file is first saved. (Available with Windows since 12.3.23).

The Office Online editors, Word, Excel, and PowerPoint lock files on open. When the edit (the webpage) is closed the file is updated and the lock is released. This may take several minutes.

If a file is opened via Team Edit all participants can collaboratively edit the file.

Zoho editors lock files on open. The file will be unlocked on Save. If the file is opened for editing but not saved then a user has to proceed with a manual unlock from the File Fabric.

If a file is opened via Team Edit all participants can collaboratively edit the file. The file will not be locked by the File Fabric, which means that other users could also edit the file without using collaborative editing. This can result in lost updates.