The aim of this tutorial is simply to demonstrate how to set up Synchronization using Cloud Sync which is installed as part of the Windows Apps.

The Sync App enables documents to be worked on locally and synced back to the Cloud, as opposed to the native Cloud Drive, or WebDAV Drive, both of which provide a view of remote data. The combination of both can be very powerful when dealing with large amounts of unstructured corporate data.

This tutorial can be downloaded as a PDF here.

1 Setting up a Sync Pair 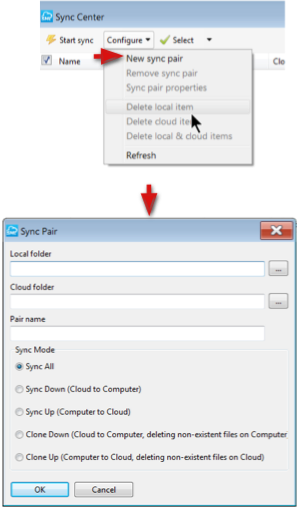 Simply launch the Sync App from the Cloud Dashboard or directly from the Program Group on Windows.

After the App has launched first create a new Sync Pair

Creating a new sync pair enables the mapping of a local desktop folder with a remote cloud folder. This can be an existing folder locally and on cloud or new folders on both or a combination.

If you select a folder locally that has data and a folder on the cloud that has data then Storage Made Easy will try to merge both folders (if Sync all is selected). In the event of two documents with the same name then the newer document will be the document that is kept.

When a Sync occurs then prior to the Sync the server checks it has the latest state of the underlying data storage (in the event that files were added direct to the remote cloud. SME becomes aware of these files and they are then synced).

The Sync pair is simply created by choosing the remote and local folder and selecting the type of sync required. The most common is Sync All in which both remote and local are kept in sync with each other. Sync down only syncs new files from the cloud down to the local machine. Sync up only syncs new local files up to the cloud. Clones work differently in that a clone up or clone down replicates an entire local or remote directory structure. 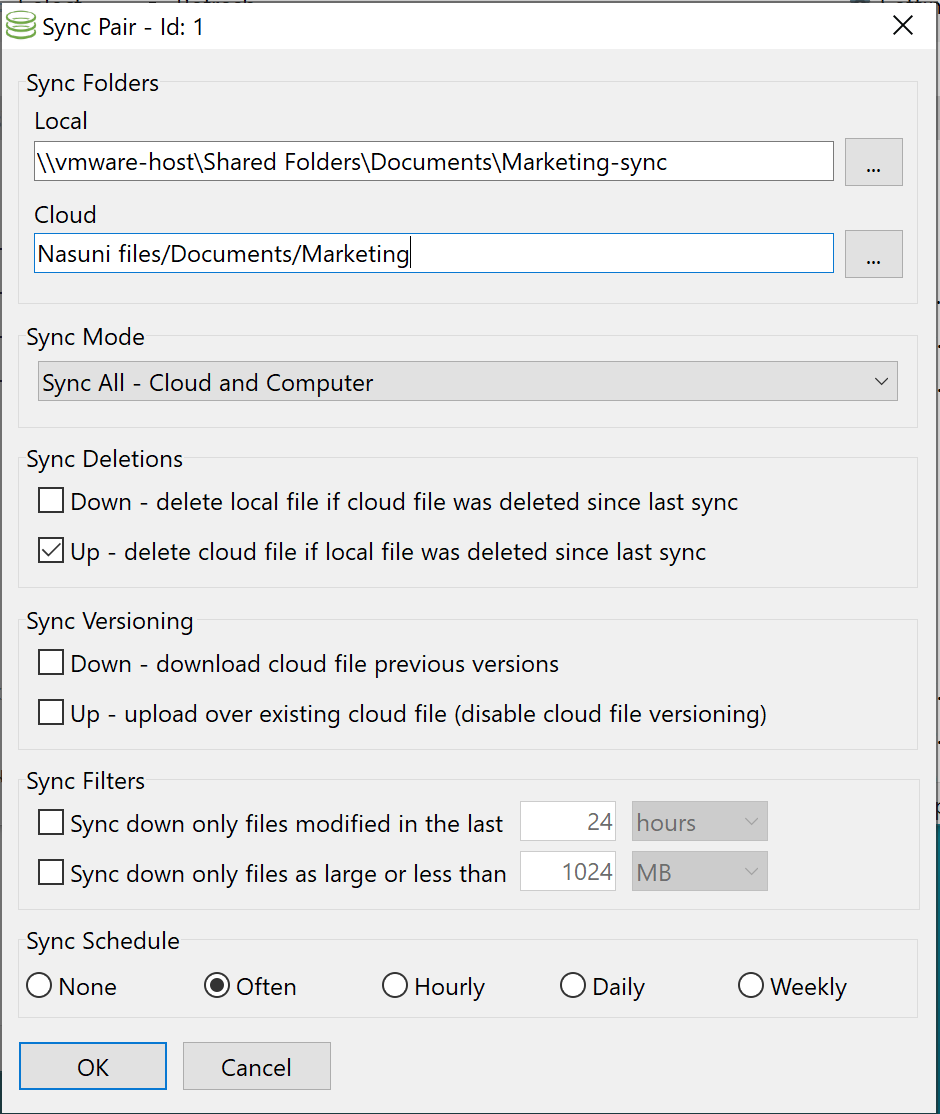 The Sync Tools enable as many paired folders as required to be setup.

The folder names can be anything they do not need to be called the same.

The local folder can be in any location.

After adding the two sync pairs our Sync tools look as above.

We can see that there are two paired sync folders, both in different local directories, both on different Clouds. If we wished we could setup several more local folders with different, or similar clouds, but the sync pairs we have setup will server our example.

Now that we have set the sync pairs we can simply start the sync. Once this is done we can see the sync process and the state of the files change as they are uploaded. The blue bar on top of the green bar shows that both local and remote are in sync. 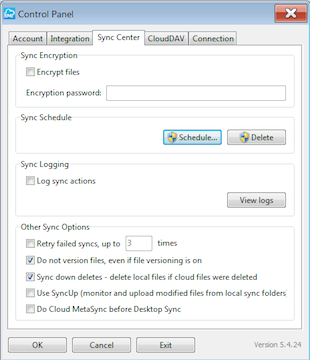 As well as manual Sync the Sync tools integrate into the windows scheduler which enables quite sophisticated schedules to be setup. A sync schedule can be setup from the sync settings accessed from the Sync App or from the Windows Cloud Dashboard.

Prior to scheduling the sync, other sync options can be set:

The icons under the '?' column indicate what will happen on a sync. Blue represents the cloud and green the local device: 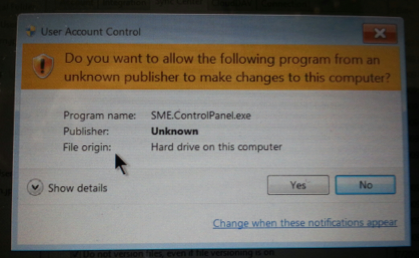 It is possible you may receive a windows alert when you click the schedule button for sync. The Alert above was generate by Microsoft Essentials for Window 7 but other Apps may also generate such alerts. You should click through this alert and/or whitelist the SME Control Panel App so that you do no receive future such alerts. 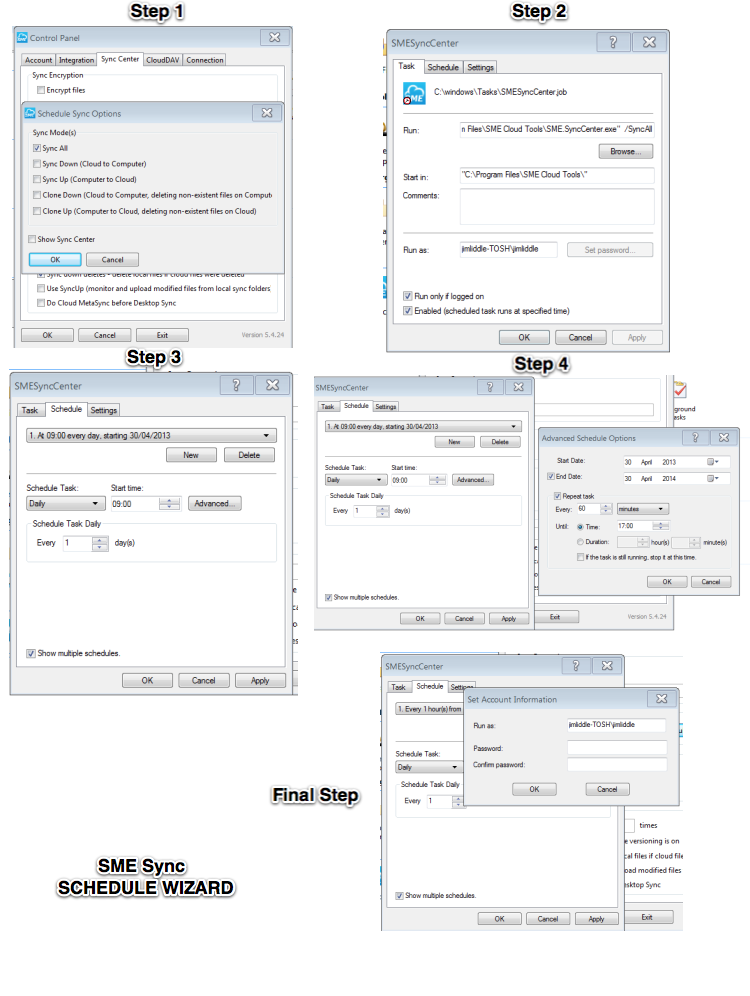 Step 1: Clicking the schedule sync button will start the wizard for setting up the sync schedule.The first step is to decide upon the type of sync. Normally this would be the default, “Sync all”.

Step 2: The next step of the wizard should normally just be clicked through unless you want to run the schedule as a different user.

Step 3: Setting the schedule can be done using the various options of the windows scheduler. For our example we have set a sync task to start at 9 am every day.

Step 4: In our example we have clicked the Advance option to schedule the sync to run every hour until 5PM each day.

Step 5: The final step once Applying or clicking OK is simply to confirm the password of the account you are running the sync “as” -this is normally the user account.

Once completed the Sync will run in the background (unless you choose the option to have it run in the foreground).

Depending on the version of the Sync App you have, the Sync will either silently run and display nothing or display a windows tray message when the sync starts and stops.

The scheduled syncs will not run while the Cloud Sync Window is open.

The Windows Task Scheduler can help diagnose the reason a cloud sync may fail to startup. You may need to increase the logging level.